Am I Pedaling Hard Enough? Measuring Effort in an Indoor Cycling Class

Am I Pedaling Hard Enough? Measuring Effort in an Indoor Cycling Class

In order to promote community participation, open debate, and facilitate the sharing of fitness-related news, Active Life DC allows members of the local fitness community to contribute posts. We do not vet these posts, and the opinions expressed are those of the author and not necessarily those of Active Life DC. More information can be found in our Terms of Service. For information on how you can submit a post, visit this page.

6 Winter Conditioning Tips for Cyclists
Best Indoor Cycling Instructors for Those Who Ride Outside
Spin Class to Riding Outdoors: 6 Physical Tips to Improve on the Bike
Cycling Indoors This Winter? 4 Tips for Staying Mentally Focused
Measure Your Performance in a DC Cycling Studio
Best Activity Trackers for Indoor Cycling
15 Tips for Washington DC Bike Commuters
Understanding Your Performance in Spin Class
5 Washington DC Area Bike Trails for the Indoor Cyclist Who Wants To Ride Outside
How Watching the Tour de France Can Make you a Better Cyclist

“Am I Pedalling Hard Enough?”: Measuring Effort in an Indoor Cycling Class

“That class kicked my ass.” The hackneyed sentence heard outside indoor cycling studio across the D.C. area. Over-confidence theory prevails, with the appearance of sweat converted into level of exertion. Pedaling fast elevates your heart rate, and in a hot room, one is bound to sweat. Stages Indoor Cycling Master Instructor Caesar Russell comments: “It’s not about how fast you ride, but how hard you ride.” But how do you define hard? This article discusses three methods for measuring effort, Rate of Perceived Effort, heart rate and power.

Developed by Swedish scientist Robert Borg, fitness instructors frequently employ RPE to assist attendees in gauging exertion -- read more about exertion from the Center for Disease Control . Borg’s Scale goes from 1 -20 and he later created a scale from six to 20, eliminating the lowest efforts. Most fitness instructors use some adaptation of Borg’s CR-10 scale, seen below: 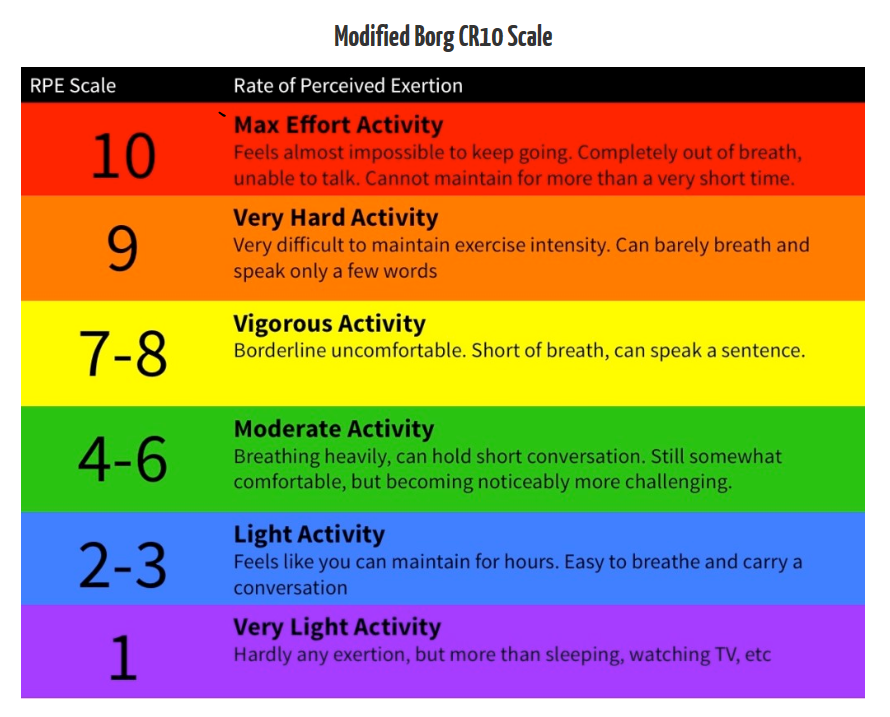 When teaching indoor cycling class, I shrink RPE into three zones. One of my favorite indoor cycling cues, “If you were to have a conversation right now, could you respond in paragraphs, sentences or words?” Paragraphs would be a leisurely pace (RPE 2-4). Sentences represent a concerted effort (RPE 5-7). I consider Breathless as the stage beyond Words. Challenging your body to exert at each stage, and not only breathless, is key to cardiovascular development. As contradictory as it may sound, training at lower exertion levels may help you become a faster rider.

It’s important not to confuse exertion with cadence. Cadence, or revolutions per minute (rpm), measures how fast you are turning the pedals. An RPM of 110 does not reveal anything about effort. Research reveals a single minute of very intense exercise may be as effective as 5 minutes of exercise at a lower intensity. Considering indoor cycling is less than an hour, intensity definitely counts. 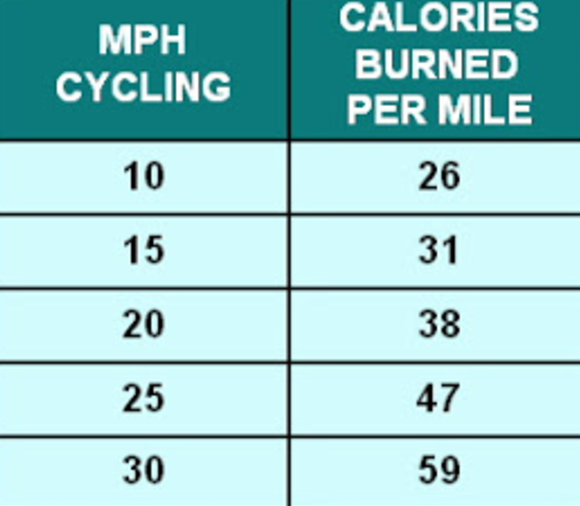 A study published by the Journal of Preventative Cardiology revealed cyclists who pedaled with more intensity lived 1.7 to 2.4 years longer than those who pedalled with average intensity. The table above, developed by Dr. Ed Coyle correlates cycling speed to calories burned. His investigation focused on outdoor performance. Indoors, the calorie burn will be somewhat lower.

Watts, or power, is a measure of cadence and resistance. It is a truer metric of intensity. Indoors, power is based on cadence and resistance. Weight is a also a key variable. There’s a difference between the watts generated by a 200 pound rider versus a 125 pound rider. OffRoad DC uses an advanced tracking system, called Stages Flight (shown below), which creates a personalized power profile. Upon completion, a rider’s effort can be shown in relation to the baseline watts.

A professional cyclist can generate 200 - 300 watts on a four hour ride. According to Bicycling magazine , this number balloons on sprints with a professional cyclist pushing 1200 - 1400 watts, compared to 600 - 800 watts for a recreational cyclist. Generally, I advise watts equal to your body weight as an honorable goal. Power to weight ratio is the golden metric for cyclists. 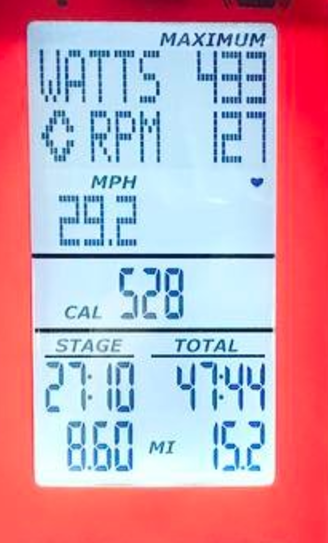 Several D.C. studios employ bikes that show Watts on the bike consoles.Cycled,Equinox,Wired Cycling,Vidaand CycleBar are among the D.C, studios whose bikes display watts. Flywheel uses a concept called ‘torq ’ which is similar to watts. Regardless of the measure, if you stay consistent with the type of bike you ride, you’ll be able to track your results.

Lastly, you can always do your own workouts using watts. Bikes in several gym chains display watts. You’ll have to pay close attention to the console to ensure you aren’t slacking.

For the loners, new technology by Zwift,TrainerRoad and bkool allow you to connect to a trainer and race others online. Then there’s the ever ubiquitous Peloton bike,which allows you to measure power and race others while watching an instructor on the flat screen monitor. The choice is yours!

Are You the Next Evelyn Stevens?

At age 26, American cyclist Evelyn Stevens, left a Wall St job on Wall Street to try her hand in bike racing. After early promise, she was eventually tested by doctors to determine her cardiovascular capabilities, among other things.

In describing the results, doctors said, “She is capable of producing a huge amount of leg power—measured in watts—for someone her weight and with her training history. With less than a year on the bike, Ms. Stevens could put out 310 watts of power for five minutes” Professional women cyclists will produce between 180 and 300 watts on a multi-hour ride. Before retiring this year, the 5' 5", 123-pound Stevens set the one hour women’s record for furthest distance ridden on a bike at 27.8 miles. She also competed in the 2012 and 2016 Olympics.

Cycling is often a second or third sport for athletes. Weekends in D.C. make a 3 hour ride a possibility. A Wall St Journal article comments, “The exceptional attributes of cyclists and other endurance athletes are less obvious—they’re hidden in their blood and their lungs. For this reason, it’s not uncommon, especially in women’s cycling, for athletes to discover their hidden talents late in life.” Test your limits indoors, using the Borg method, heart rate or watts. Then take it outside -- the Washington Area Bicyclists Association can help. You could be the next Evelyn Stevens!

Measure Your Performance in a DC Cycling Studio

Understanding Your Performance in Spin Class

Elevate's Winter Special: Get 50% Off Your First Month When You Join!